Cut the Rope – Fun Puzzles Game For iPhone And Android 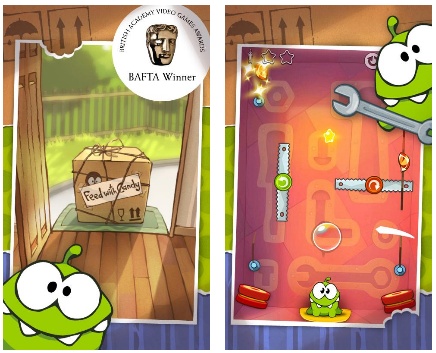 It is a physics puzzle game that requires you to cut ropes and bounce on bubles to collect stars and feed the cutest little green monster.Great graphics, smooth gameplay, a nice ramp-up in difficulty and a whole lot of levels. Really nice all-around game.

A NEW TWIST ON THE FAMILIAR AND HIGHLY ADDICTIVE GAMEPLAY
Cut the Rope: Experiments combines the same rope-cutting and monster-feeding action that millions of people around the globe have come to love, with new features and gameplay elements including Rope Shooters and Suction-cups. Can you help the Professor and Om Nom get through these wacky experiments?
– 100 new experiments (levels) across 4 colorful new settings, with more to come!
– 4 level packs: Getting Started, Shooting the Candy, Sticky Steps and Rocket Science
– New musical tracks, sounds and Om Nom animations

MEET THE PROFESSOR!
Meet the newest character in Om Nom’s adventures! The wacky Professor adds colorful commentary in response to gameplay achievements (or lack thereof!), adding a new element of interaction between the player and the game. How did Om Nom end up outside the scientist’s house? And why is he so intrigued with the little creature?
– Find hidden photo evidence to help the scientist with his experiments! Complete the professor’s photo album and share with your friends on Facebook
– New animated storyline featuring the professor’s intriguing commentary and reactions to Om Nom’s behavior – What will he think of YOUR achievements?

ALL NEW LEVELS – SAME GREAT FEATURES
– Game Center support for achievements and leaderboards – compare your progress to other rope cutters around the world!
– “Gift This App” option makes it easy to share Om Nom with friends