Google Maps 5.0 for Android With 3D view and Offline Rerouting 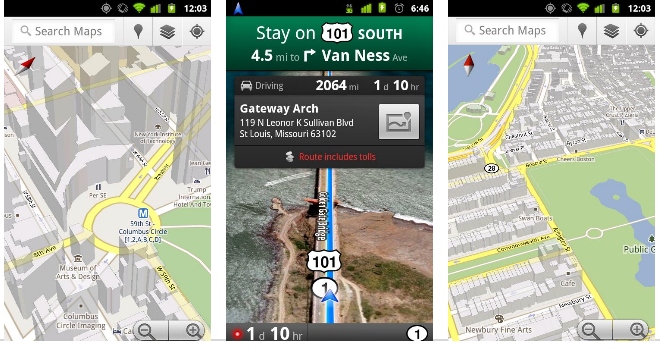 There are two major features in this release are 3D view and offline rerouting. The 3D view uses vector graphics to dynamically draw the map on the screen of your android phones. You can rotate it and smoothly zoom in and out the map with finger gestures. Another new feature is the compass mode, which enables users to center the map on their location and then tap the compass button to flip the map into 3D mode.

The Offline rerouting feature doesn’t work entirely offline, as the app now caches the areas next to the one you’re currently in, but Android device owners who use the free turn-by-turn GPS navigation feature and lose their Internet connection briefly will continue to get accurate voice guidance for a short time until the connection is re-established.

Google Maps 5.0 is a free download for Android phones. Android 1.6 devices can get Maps 5.0, but most of the new features (including 3D maps and offline caching) requires 2.0 or above.

If you want to get Google Maps 5.0 on your Android phones, just go to the Android Market via your mobile phone and search for it or if you are using QR scanner just scan the code below.