Home / Tips / How to Insert MP3 Songs Into Guitar Flash

How to Insert MP3 Songs Into Guitar Flash

Guitar Flash is a music game similar to Guitar Hero on PC. Not only is this game available online, but you can also play it on Android and download the game for free from the Play Store.

There are tons of music that can be played in this game. Initially, only some of the music you can play will be available and later you can unlock music in Guitar Flash using the points you get from playing the game.

In this latest update, the Guitar Flash game can be played online, if usually the available music you can play offline without an internet connection, now the music that you will play on guitar flash will be connected directly to youtube, so it is possible to play music directly from youtube, but this will spend internet quota to play this game.

But for those of you who feel wasteful of quota when playing Guitar Flash games online, you can add music from our smartphones so that it can be played offline, so when playing this game you don’t have to connect to the internet first.

How to Insert MP3 Into Guitar Flash

If users who intend to follow how to insert mp3 songs into guitar flash then you can see the tutorial as follows.

Step 1. First of all, please download the music you want to put on your guitar flash, for example I will include the song Metalica – Hardwired, you can download it from Youtube and convert it to mp3 on the ytmp3.cc site.

Read: How to Use Stitch Feature in Tiktok

Step 2. After that open the File manager on your phone. Then access to the folder where you saved the mp3 songs you have downloaded.

Step 3. Copy the downloaded song to Internal Memory> Guitar Flash> Songs. Paste it into a folder according to the name of the song, for example Hardwired – Metallica. 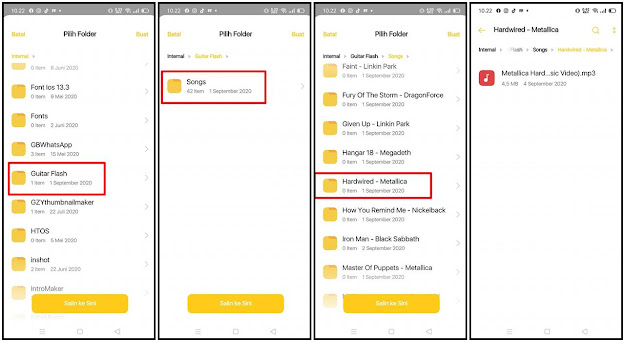 Step 5. After that, run the Guitar Flash game then select the song you want to add. Tap Got then match the beat of the song according to the tone above.

Step 6. When appropriate, tap Save to apply the changes.

And now you can play the song offline without having to connect to the internet or youtube. That’s my tutorial on How to Insert MP3 Songs Into the latest Guitar Flash, I hope it’s useful.

Also find out other interesting information that you can follow such as how to change Whatsapp ringtones with mp3 songs on Infinix which may be useful later. If you have other steps, then you can write them in the comments column below.