This game is so much better than the original (and temple run brave). With new, great, very noticeable difference between the graphics in it, Also, it has new stuff like zip lining, jumping and sliding over new obstacles like a spinning blade thing, and driving through a mine in a mine cart. 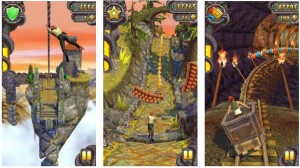 The story of the game is less important than the gameplay, which is ridiculously addictive. Players will be challenged to test their reflexes as they run and avoid various obstacles, collect coins and buy power ups.

“Temple Run 2” is now available as a free download in the Google Play and it should be compatible with all devices running Android 2.1 and up.